The rain came down and the floods came up 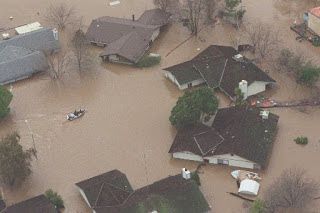 With the flooding of July 2007 being such a major talking point at the moment, not least in my place of work amongst the old busy-body-fogies, it was only going to be a matter of time before a flood-related posting went up. The other day, one of my colleagues – the archetypal doom ‘n’ gloom merchant – was bandying the phrase ‘Act of God’ about as if it was going out of fashion. This colleague, it should be said, was taking great delight in the fact one of her, much hated co-workers had, or at least was about to, lose her caravan to the floods. Think that says more about her than anything else, and yes, it is a shame. Tragically, she was prophesising about how the flood victims would cope, if and to what extent there would be financial aid, and who was to blame. Then, I spotted an article in the Times law section this week about this very issue. To her credit, she was largely right in that, given that the majority of flood defences are the responsibility of various statutory bodies, few flood victims have a hope in securing compensation against them. So, once again, the law calculatedly leaves people ‘without a remedy’ (the phrase ‘high and dry’ just didn’t seem appropriate there – and let’s face it, ‘down and wet’ doesn’t really have the same ring to it. Insurance is the one saviour here, although, I suspect, to by no means everyone affected. If the law AND insurance dessert you, I’m not sure who else there to turn to. Maybe God, of course. It was His act, after all. And to get back to an earlier question: who is to blame? Tough one, quite honestly. So to coin a phrase so ably yet distastefully used by B*witched for a song a few years ago…. “Blame it on the weatherman”.
- August 01, 2007 2 comments: