The Law of Printers

There can be few things more frustrating in life than working with computer printers.  They’re hungry, unpredictable and unreasonable beasts – right from setting up and first use.

And sod’s law being what it is, the problems always strike in their most severe form when you absolutely need to print that document on a very tight deadline.  I remember as a law student, I had some uncomfortably close shaves involving my old HP Officejet and getting assignments submitted for marking.  They were very  much “do or die” moments.

Wisely, I abandoned inkjet printers two years ago now (and have avoided Epson printers like the plague since my first inkjet in 1999).

Still, for anyone still suffering with them, I think this picture sums up your likely experience very nicely.  ;-) 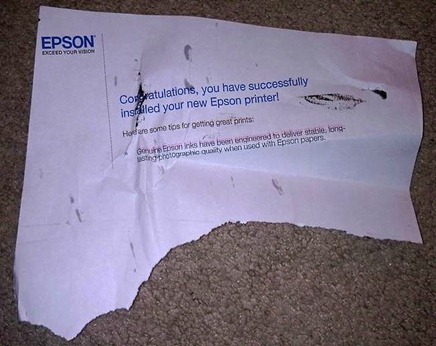 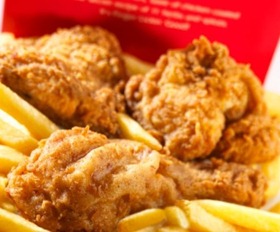 A deranged customer who rammed his car into a KFC restaurant because staff refused to serve him a bargain bucket has been jailed.

Hugh Brown flipped (a burger? / the lid of a KFC bucket?) when workers would not serve him the £10.99 meal deal because the fast food shop had closed 20 minutes earlier.

Ohh – I remember the time when a bargain bucket was £9.99 AND you got 10 pieces of chicken.  Those were the days!

He flew into a rage reminiscent of scenes from the Michael Douglas film Falling Down after going to the drive-through window only to be told the outlet was shut for the day.

Brown then drove his car into the front window of the building. CCTV pictures show him grabbing a 6m (20ft) metal pole from the debris and using it to threaten three members of staff.

He sure was hungry. Or as the “have a go hero” aboard the bus in “Speed” might have uttered, “that man sure has a hard-on for a bit of Kentucky fried chicken”. (You’ll have to imagine the accent).  Or something.

As the terrified workers cowered in the kitchen, Brown hurled the pole at them ‘like a javelin’ and fled.

Hoping to spear a run-away chicken wing, no doubt?

The police arrived and as he tried to escape he slammed his vehicle into a  patrol car four times.

When he was arrested Brown, 50, told officers: ‘I did it because they wouldn’t give me a bargain bucket.’ He admitted charges of affray, damaging property, dangerous driving and attempted grievous bodily harm with intent.

And what troopers the staff were who had to cope with Brown’s frenzied antics.  I would have a thought a fast food kitchen would be dangerous enough place anyway, with all kinds of injuries lying in wait. What with deep fat fryers to fall head first into, chicken bones to choke on and those evil sachets of salt just waiting to disease your heart, getting a scaffolding pole hurtled at you from a deranged wannabe customer would likely be water off a rubber glove to those burger-flipping heroes.

Brown, who lives in the town, scaled a garage roof after crashing his car into a police vehicle to escape.

As officers tried to coax him down he  yelled: ‘I’ve got Hep [hepatitis] C, I’ll spit on you.’

Goodness. What a charmer.

Maxine Krone, defending, said Brown was taking medication for an anxiety disorder at the time of the attack.

Probably more accurate to say “he was prescribed medication”. I think it’s safe to assume he wasn’t guilty of taking it.

But what a silly chap. After being turned away from the drive through, couldn’t he have bombed down to the 24/7 ASDA, bought a box full of the SFC rip-off imitation KFC meals and trotted off home to cook them in his oven? Ahem. I know they’re a poor substitute, but it’s better than going to jail.

Still, at least he didn’t do what I did a few years ago: walk in and ask for two “coll-own-ell meals” to be met by a response akin to walking into a monastery and asking if there are any whores around who are up for it.

Anyhoo, rather than diverting tax payers’ money putting the wheels of the criminal justice system in motion against Brown, I’d have hauled his sorry ass before “the” Colonel Sanders and had him courts martialled. (I’m sure that would have involved letting frustrated prison guards beat his sorry carcass with frozen chicken drummers – Guantanamo Bay style, naturally.

Btw, I’m sure the Colonel and Rolf Harris are distantly related.  In a dim light maybe?

You can find a lot of interesting shows stuff on YouTube these days.

Don’t look at me like that.  I’m certainly not condoning copyright infringement but, you know, if it’s available on YouTube, what’s the harm in a quick butchers?  But be snappy about it: they might have pulled the content by the next time you go back.

I’ve always had a penchant for a good detective series (even though there are some which I simply cannot abide).

Whilst catching up on a classic mid-nineties episode of A Touch of Frost recently, I was amused by the attempt at a disclaimer the uploader had included:

Now I’ve had my eyes opened, I’ve seen it used more and more.

Watching laypeople wrestle with the concept of disclaimer can be an interesting experience.  More entertaining than the actual show in many cases.

Btw, does anybody else get a kick out of watching compilations of TV ads from their childhood?

Perhaps it’s just me then.

(Or it might as well be). You know I’m a one for sensationalist headlines. 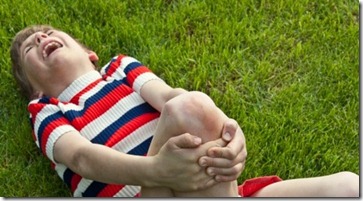 A "cotton wool culture" of over-protecting children has contributed to a decline in freedom for them to play, heath [sic] and safety watchdogs said yesterday.

They said that too often regulations were wrongly cited as an excuse when denying youngsters the chance to have fun outdoors.

Children needed to be able to be able to take part in activities such as climbing and playing conkers to learn about risk and grasp the realities of the world, the Health and Safety Executive said in a joint statement with the Play Safety Forum.

It comes in response to a "significant loss in freedom" for children over the past 40 years and proposes a more balanced approach which accepts children will often be exposed to risk and even danger when they play.

Play providers should focus on "sensible adult judgements" rather than an overblown fear of litigation and prosecution, the statement says.

The scourge of the personal injury claim you might say then.  Oooh – contentious!

Kids need to learn from their mistakes. Over-shielding them from perceived dangers can be far more harmful than letting them break their leg falling out of tree. Far better they learn the lesson properly once, than carrying their naiveté into adulthood.

I recall a childhood friend who was forever walking into trouble (and being stretchered into A&E after all sorts of accidents which spanned the spectrum from football incidents to being nearly stung to death disturbing a wasps’ nest).  Actually, I’ve picked a bad example as I haven’t had sight nor sound of him for probably 10 years or so.  Still, I’m sure he’s fine.

Apart from a smashing my face when I tripped up as a toddler, and getting run over by a post van when I was 10 (other than shock, I was absolutely fine - ahem), I got off pretty lightly from childhood injuries (playground bumps, scrapes and scuffed knees aside). I like to think I had a good time, learnt from my mistakes and, you know, actually used that thing in side my head called a brain. I think all kids could do with a dose of that.

All kids need a few bumps and scrapes as part of healthy play.  It’s just a fact of life.

In other news, you might be relieved to hear that the disease afflicting horse chestnut trees across the UK means there soon won’t be any conkers around for kids to play those dreadfully hazardous autumnal games with.

Still, with the conkers gone, they can get back to sniffing glue and perpetuating the STD epidemic.

How a Trust Deed can help YOU! 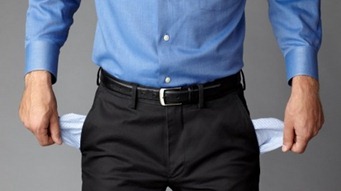 Trust deeds are the Scottish equivalent of an Individual Voluntary Arrangement (IVA).

By using a trust deed, the debtor transfers their estate to the trustee to be held on trust for the benefit of creditors. Providing the debtor complies with the obligations set out in the trust deed (including the making of regular monthly repayments to the creditors) the estate held on trust remains untouched and is returned at the end of the relevant period.

Unlike an IVA, it is normally only available to debtors who owe £10,000 or more and usually lasts for 3 years instead of 5. There is no court involvement and the existence of the trust deed and the debtor’s perilous financial situation is not publicised.

Trust deeds allow people to pay back a fixed amount of the overall debt and the outstanding amount is essentially written off.

A trust deed remains a powerful and effective debt solution option for those who find themselves in debt.

Bikes and trains: an unhappy marriage 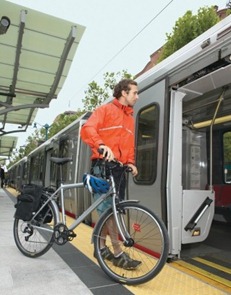 Like many of my fellow commuters, I’m going I’m going to buy a bike and take it on the train to work each day.

I’ve no intention of riding it. I just intend to take that cumbersome monster about with me on trains, station platforms, and along narrow pavements to be just about as damn awkward as I possibly can – exactly how my fellow commuters treat me.

I can make a massive fuss trying to get my bike in and out of the bike rack on the train. I can wheel it along the platform with the handlebars bumping into all and sundry (even using them to whip a newspaper out of someone’s hands). I can bash people’s shins with my pedals and generally act like a mindless cretin on a two wheels.

Oh, and them I’m going to try and hog a double seat on the train using my cycle helmet and dayglo backpack to ‘reserve’ that seat next to me.

I’m all for cutting carbon emissions and cycling (not that I’d ever dream of doing so on the UK’s roads now where an RTA is a mathematical certainty rather than an acceptable risk), but the more I see of this awkward marriage, the more I’m certain that bikes and trains just don’t mix.