Tee hee. This is a good one.

References to decades-old computer software are included in the new Brexit agreement, including a description of Netscape Communicator and Mozilla Mail as being "modern" services.

Experts believe officials must have copied and pasted chunks of text from old legislation into the document.

The references are on page 921 of the trade deal, in a section on encryption technology.

It also recommends using systems that are now vulnerable to cyber-attacks.

The latter two are now defunct - the last major release of Netscape Communicator was in 1997.

I think all solicitors have experienced that sinking feeling when they find they've left something in an agreement that really should have been removed from the precedent on which it was based. The name of a previous client is a classic or the product/service that that previous client provided. Instances of irrelevant technical crap being left buried in a schedule isn't unheard of either.

But this stuff happens; it's not the end of the world. And it's proven that someone's reading the Brexit agreement at least. 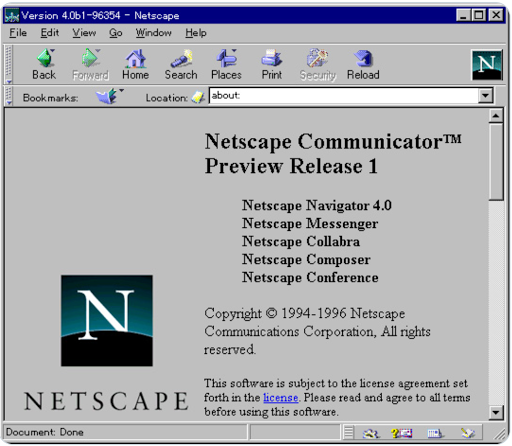 I remember Netscape Navigator fondly. On my first PC, back in 1999, I found it to be much more reliable than the pesky installation of Internet Explorer 4 with which I had to grapple. As I recall, it would often freeze my entire system without warning, forcing me to switch it off at the wall.

It was eventually fixed after I completely corrupted that computer in late December that year — apparently, uninstalling software wasn’t as straightforward as manually deleting the programme files, sigh — and it necessitated a mercy dash to computer man extraordinaire ‘Slim Steve’.

Once Steve finally got round to it some days after the drop-off, he reinstalled Windows for me and generally saved the day, allowing me to get my teenage kicks through the internet once more.

Thanks again, Steve, wherever you are now.

What happened to the Law Society’s professional development centre?

I've come to rely on the Law Society’s professional development centre (let’s call it PDC) as part of my diet of CPD or continuing competence or whatever we’re meant to call it these days. Over the past 12 months or so I viewed webinars the Law Society offered on vertical agreements, legal privilege in 2020, cyber security and a contract law update. All were pretty good. And all were reasonably priced (not that I personally pay for it).

In November, the Law Society pulled the plug on their PDC service. The portal is still there, but all courses have been marked as ‘inactive’ and you can’t purchase new material. I still had a webinar to complete before the switch off occurred. Damn!

It turns out the Law Society put out a blog post out about it in early November, but my attention was elsewhere at the time.

From 23 November 2020, the Professional Development Centre (PDC) will no longer be available.

You’ll need to complete any courses you have begun by this date. You’ll also need to download any training records and certificates you want to keep while you still have access.

The advent of Law Society Learning is all well and good, but there’s a paltry selection of content on there currently — just practice management stuff. 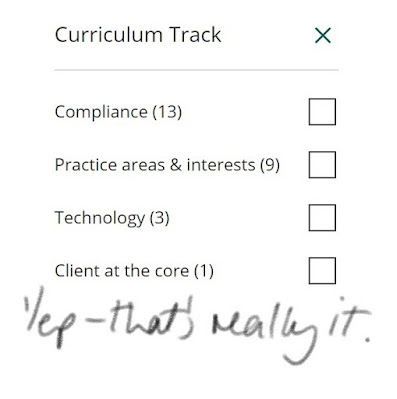 And that’s a real shame. What I don’t get is why they couldn’t port across all of the existing content from PDC. They seem to be starting completely from scratch. Perhaps it's a licensing thing.

A Christmas checklist from B&Q

I received the following piece of nonsense in my inbox earlier from B&Q. 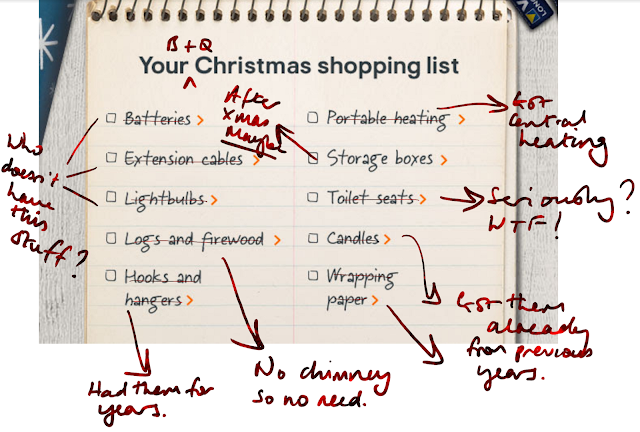 Because that's what you really need over Christmas, isn't it - a fricking toilet seat! Actually, they say 'seats' - PLURAL. What sort of digestive calamities are B&Q anticipating here??

What utter bollocks this is. Mindless consumerism at its absolute worst! (On second thoughts, that award probably goes to secret santa arrangements in workplaces up and down the land. Suffice it to say that I always opt out of that nonsense.)