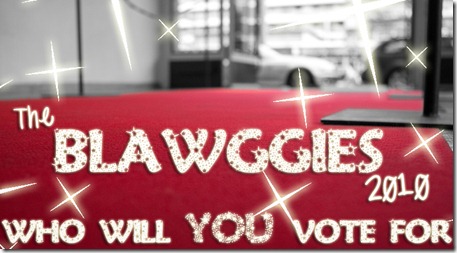 Yes, after two long weeks of nominations, the shortlist for the 2010 Blawggies has been decided and voting for the awards can officially begin! The polls will remain open for 2 weeks.

You can place your votes here

The rules are simple enough: one vote for each of the 8 categories for the blawg you’d like to win.  As before, please don’t vote for your own blawg.

As democratically determined by the ‘sphere, the shortlist of nominees for each category consist of:

Of interest to lawyers

The Justice of the Peace Blog


'Blawg of the Year'

Pupillage and how to get it

Will I Be Barred?

*Attention all voters - Update to Blawggies 2010*

** Jack of Kent has requested that his blawg is removed from the short-list.

*Charon QC has asked for his blawg to be removed from the short-list, as he wishes to maintain a consistent stance in relation to all blawgging awards. Accordingly, this blawg no longer features in the short-list for the 2010 Blawggies and you can no longer vote for it.

Please note: if you have voted for Charon QC in any of the 4 categories he was nominated for, these votes will be omitted from the final count. However, the votes you may have cast at the same time for other blogs in other categories will still be counted.