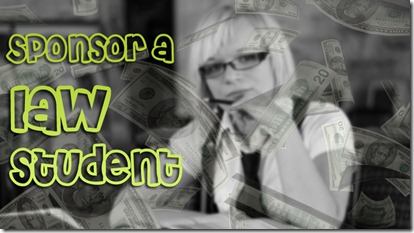 Tuition fees are very much in vogue at the moment, given the prospective hike in fees which UK students can expect to be paying soon.

If attending a collegiate demonstration and rocking a police van from side to side with your peers isn’t quite your thing, you could always try different tack. Why not take a leaf out of US blawgger Ruth Carter’s book.

I was fascinated to read a post from a her blog, the Undeniable Ruth, which appeals to her readers for sponsorship to help her pay her law school fees. Whatever your feelings about this approach, it’s certainly an interesting idea. From my perspective, I’m not sure whether this counts as evidence of good entrepreneurial flare, a quirky idea to help cover the spiralling costs of tuition or brash impertinence.

When I applied to law school, the average debt for a student graduating from my program was ~$50,000. Today, the average debt is over $89,000! That’s insane! How did my education get $40,000 more expensive?! I have one semester left, plus studying for and taking the Bar. I’m reaching out to the online community to help me pay for it.

Sponsor A Law Kid gives anyone who wants to the opportunity to sponsor my legal education for a day. It will run from January 1, 2011 until July 27, 2011 – the last day of the Arizona Bar Exam. Each day can have one sponsor.

Why should anyone give up a couple bucks, or a couple hundred bucks, to help pay for my education? In exchange for your sponsorship, for each day that I’m sponsored, I’ll publish a blog [post] that tells the world how awesome you, your organization, and/or your products are. Also, it will give you a warm fuzzy feeling knowing that you’re part of something awesome.

So besides spiritual fulfillment and a general sense of philanthropy, is that sufficient ROI for a cold-hearted commercial sponsoror? Probably not, but, let’s face it, that not who this is really aimed at.

Maybe one of the UK blawgers who still ‘in education’ could try this idea. Anyone? I can’t see many law firms queuing up to part-sponsor a student through their legal education but you never know. Nothing ventured, nothing gained and all that. It’ll be an interesting experiment if nothing else.

Ruth has taken a lot of flak for her sponsorship plan with a lot of strong views expressed in the comments on the post. Opinions seem to range from, “how very dare she” right through to accusations of polite prostitution. But there are a lot of supporters out there as well.

I advised Ruth that I thought she would stand a better chance just monetising her blog in a more conventional way - through paid texts links at a monthly rate. I also feel it would mean she would gain a more sustainable, ongoing revenue stream rather than from the rather bizarre pricing structure she proposes in her post.

Ruth replied in the comments saying she’d considered this but didn’t have the readership or traffic levels.

But I think she’s a smart cookie and is more than capable of using her blog to at least partly pay for her legal education without any advice - least of all from me. Actually, I’m curious as to whether this was her plan all along and that ‘sponsor a law kid’ was just a publicity stunt to gain readership and increase her pagerank with a view to cashing in on in paid links. Whatever the truth, it certainly seems to be working.

I know the UK are pretty lukewarm on the US blawgopshere, just as I’m sure they are about us, but I’ve always enjoyed keeping abreast of the developments t’other side of the pond. Ruth’s is one of the best: well designed, well written, and regularly updated. We could do with a few more of them and I’d strongly recommend checking it out.

Her sponsor a law kid idea is quirky, left-field and rather provocative. But that’s pretty much what the ideal blawg should be, right?