Is the iPad culture killing blogging? 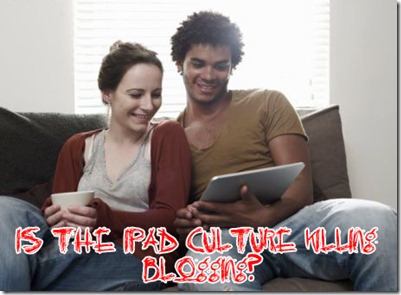 I’ve been quite vocal about the decline in the UK blawgopshere in the last couple of years, but I’ve suddenly started noticing a few worrying signs about our counterparts in the US. They’re starting to drop off the map, too.

It’s not just the half-hearted hobbyist bloggers though. Suddenly some of the heavy-hitters who have been lynchpins in the ‘sphere for several years have decided it’s time to reserve their energies for more meritorious ends. So what’s driving this sudden exodus?

For me, the biggest question is what has happened to the stream of new blood that was flooding in a couple of years ago. New law students are still enrolling each year, so where are the fresh-faced upstarts ready to pick up the slack? Granted, only a tiny proportion would have ever become bloggers, but when those that would have done so 3 years ago, no longer regard blogging as a worthwhile activity, we’re suddenly on a one-way street towards extinction.

So, what’s causing the well-established regulars to wind up, as well as discouraging newbies from trying it in the first place? Has the ‘blogging may prove harmful to your career’ message frightened off the few that would have otherwise laid claim to a small piece of the blogosphere? Given the huge amount of potentially embarrassing material people freely serve on up on their Facebook accounts, I don’t think that quite cuts it as an explanation.

Perhaps, it’s simply blogging itself. Have law students on both sides of the Atlantic suddenly decided that blogging is just a bit too ‘2007’ to be worthy of their time. Maybe they’re too busy updating their Facebook or Twitter statuses or harvesting crops on Farmville to even care.

But maybe there’s another phenomenon at play here. Something I’ve witnessed increasingly over the last 12 months which has seriously impacted web use and how the web is regarded. For want of a better term, I’ve dubbed it the ‘iPad culture’.

What I mean by this is that web-users, engulfed in a universe of social media, are content to consume web content and participate in social media rather than produce content themselves. Sure, they’re tweeting their thumbs off on a regular basis as well as checking their Facebook account every couple of minutes. They’re more than happy to inanely point their camera phone at a mislabelled item in a supermarket or at their latest culinary concoction and share it with the world. But sit down and write a blog post? No – that’s too much like hard work.

I guess we’ve been on that trajectory for a while now with the social media explosion. But the upsurge has resulted in the line between participation and content creation being blurred beyond distinction. Creativity is curtailed by participating in more instantaneous, shorter and superficial channels of communication via Twitter and Facebook for instance. Put simply, it just aint blogging.

As far as I’m concerned, everyone from law students, graduates and academics right through to seasoned practicing lawyers can all benefit from blogging. Blogging still has an important place in the social media family. It’s not entirely without risk, and it does involve a time commitment but the benefits have always outweighed the downsides.

Quite what the future holds for blawgging is anyone’s guess right now. I’m not sure I’m comfortable with this current downturn and I am left wondering whether this is the beginning of the end – if only for student blawgs.

I really hope it’s not.