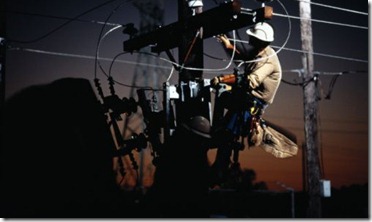 BT was fined £300,000 today after a judge said a "significant failing" by the company contributed to the death of one its engineers.

David Askew, 52, died after falling from a stepladder while working at the Canonbury Telephone Exchange, north London, in October 2006.

The experienced engineer was standing on the top rung of the seven-foot ladder and working alone at the time of his death, Southwark Crown Court, central London, heard.

The accident resulted in BT being convicted of failing to ensure the health and safety of its employees at a trial in October this year.

Judge Deborah Taylor said the company had not provided appropriate ladders, leading Mr Askew to use a wooden ladder he found on the site.

Staff working at heights had also been given "erroneous advice" in BT's manuals, which did not consider the most up-to-date legislation, she continued.

She said: "This was a significant failing by BT, whose employees regularly work at height."

"In my judgment these failures by BT contributed to Mr Askew's fall," she concluded.

That’s staggering; I thought wooden ladders went out in the 70s.

But I still don’t understand why didn’t the poor chap have ladders provided to him? What are those long silver things stuck on the roofs of the white Openreach vans?  Presumably they’re not just there for show.

And how’s this for an interesting perspective:

Ronald Thwaites QC, mitigating, said that the odds of being killed by lighting were 10 million to one, while BT employees carried out nine million climbing jobs a year.

He said: "If, on a statistical basis, deaths from falls were only as likely as death by lightning bolt strikes, most people would recognise that is a fairly remarkable record."

Well, possibly. But it’s tough to reconcile that with the fact the poor guy had to find his own (wooden) ladder. What’s more, I don’t think that’s really comparing like with like. Out of those people who are struck by lightning, surely it’s more likely they are killed rather than just suffering injuries when compared to those who are killed falling from a ladder - where the number of injuries (as opposed to deaths) must be much higher. So maybe that statistic isn’t so compelling.

Put another way, it would be very interesting to see how many people are injured or harmed without being killed by lightning strikes compared to suffering a personal injury falling from a ladder.

In any event, if that’s their stance, maybe 9 million climbing jobs a year using the right equipment and procedures would give BT a sublime safety record?  It might be something to aim for at least.