A Jury of Your Pyrs

I’ve found StatCounter to be an excellent way of discovering new content in the past. Sometimes a site links to Law Actually totally unbeknownst to me and when a visitor swings by via that link, it’s logged in my stats, so I take a quick look.

Earlier in the week, I spotted a few people had dropped by via My Muse Calls which, it turns out, is a fascinating blog of a hobby artist.

Anyhow, it seems that the author, Judy, was doing some research into her latest work – a legally themed masterpiece and stumbled across Law Actually. I see that the “Daddy of the Blawgosphere”, Charon QC, was mentioned as well, who, coincidentally, is quite the artist himself.  (Who could forget his legendary F**kART series?!?).

The fruits of Judy’s researches (and labours) is brilliant. 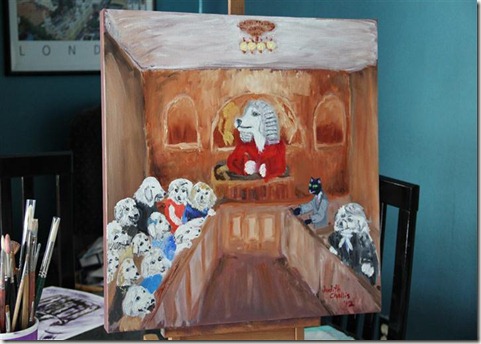 A Jury of Your Pyrs:  The View from the Dock

Other than the title being a clever play on words (“pyrs” instead of “peers” ((obviously!!)) referring to the breed Great Pyrenees), the atmosphere of the court she managed to capture is amazing.  The thumbnail above doesn’t do it justice.  Here it is in all its full-sized glory.

I was also rather taken with the fact that the judge’s robe was a shade very similar to ‘Law Actually Red’. (Maybe Dulux would be interested in commissioning a new shade with that title – I’d want Royalties for use of the name, of course!!). Funnily enough, I’m planning on redecorating my office in Law Actually HQ over the summer and quite fancy having the feature wall that hallmark shade of Law Actually Red. I’ll keep you posted how it goes.

Anyway, in the meantime, be sure to check out Judy’s blog.