Anyone for mushy grapes? 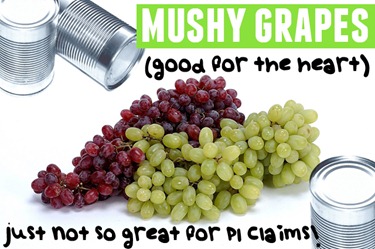 A grocer has been ordered to pay £111,000 to a shopper who slipped on “mushy" grapes outside his shop.

Samira Hassan, 57, fractured both wrists in the accident outside The Stall, in Greenford, west London.

She sued the owner, Onkar Singh Gill, claiming that despite wearing sensible shoes she had slipped on grapes that were "trodden in and mushy".

Damn grapes - how very dare they be mushy!

And it’s always grapes isn’t it? Nobody ever goes down over on a banana any more. What’s up with that?

Poor sprouts, carrots and corn on the cobs never get a look in? If you get one of those wedged between your foot and the pavement and weren’t expecting it, chances are you’re going to be eating dust in seconds.

Mr Gil, 50, said he and his staff had taken all reasonable steps to ensure that the pavement was clear of debris, sweeping the area up to five times a day.

But in September last year a County Court judge ordered him to pay Mrs Hassan - a "regular customer for a good many years" - £111,859 in compensation. Yesterday, the Appeal Court upheld that ruling.

Hmmm. I wonder if she’s regular any more. (In frequenting Gill’s shop I mean – then again, personal injury claims can play havoc on one’s digestive system!).

Rejecting Mr Gill's appeal, Lord Justice Lloyd, sitting with Mr Justice Morgan and Sir Stephen Sedley, said: "The judge did not misdirect himself on the law, nor did he make any factual findings which were not justified by the evidence".