Lawyers and the standing desk 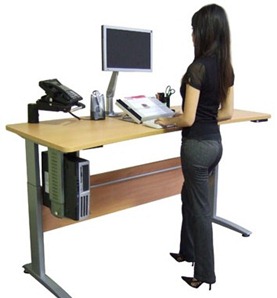 As the working population of the western world degenerates into a sedentary army of obese and disease-ridden information workers, it’s only a matter of time before this ticking time bomb goes off.

While I would never do the legal profession the disservice of referring to a lawyer as an information worker, there’s no denying that lawyers work long hours at their desks.  The negative health impact of being chained to a desk for well over 40 (50, 60?) hours a week should be fairly obvious.

In recent months, I’ve found myself getting increasingly restless sat at my desk and there’s only so much shifting around in your chair you can do to try and stave off the inevitable circulatory and posture problems. Plus, you can’t take repeated toilet or coffee breaks without attracting unwanted attention and becoming the subject of  unsavoury office gossip.

So, maybe standing at your desk is the answer.

I was interested to discover that during the Bush administration, Donald Rumsfeld insisted on a standing desk. 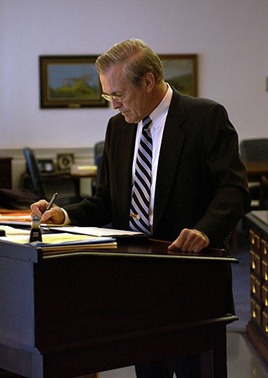 I know.  Unsettling isn’t it? Maybe he’s not such a great role model but that doesn’t mean the concept of a standing desk is a non-starter.

To many, the idea of standing at your desk all day might sound horrifying but I think the posture and health benefits are worth making the effort for.  I guess the ideal solution would be desk that can transform between sitting and standing modes.

Paul Thurrott and co were discussing the value of standing desk on Windows Weekly a few weeks ago. Apparently, Paul’s buddy, Rafael, had recently bought a desk which could switch between modes at the touch of a button.

Do you think the HR department would order me one?