Kids get first phone at the age of 7

…says some survey or another. 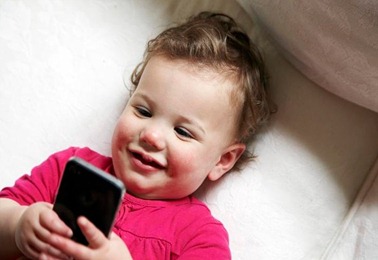 Mobile Phone Checker's survey asked around 1,000 parents about the mobile habits of their children, discovering that most parents issue mobile phones to their offspring for safety reasons.  Kids typically get their first phone at the age of 7.

Telecoms watchdog Ofcom recently found in a wider survey that anklebiters tend to get their first phone at around 10 years of age. Upon starting secondary school, they're likely to switch to a smart phone, possibly because of social pressure from classmates.

According to this latest survey, a decade ago younglings were likely to have got a phone at the age of 13 -- but in 2003 that would have been an old-school brick of a mobile "for emergencies", long before phones became more about apps, games, surfing and sending pictures of your unmentionables to random strangers.

While on a train to London the other day, I had the displeasure of being seated next to  some little munchkin who couldn’t have been much over 5.  (Thank God I only had to endure him from Reading!).  It was with some disquiet that I noticed he had a much newer and nicer smartphone that I have.  What’s more, he bagsied the power socket as soon as he plonked himself down on the seat beside me.

Do kids of that age really need a smartphone?

What the heck do they use them for?

Email ThisBlogThis!Share to TwitterShare to FacebookShare to Pinterest
Labels: Technology