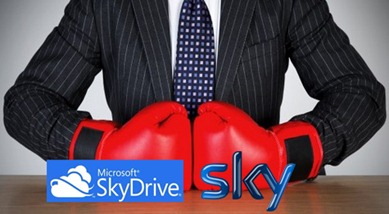 Microsoft confirmed on Wednesday that it will not fight a July ruling by the England and Wales High Court in which it was found to have infringed on British Sky Broadcasting (BSkyB) trademarks for the term “Sky.” As a result, Microsoft has agreed to rebrand its SkyDrive cloud storage service with a new, as yet-unknown name.

Under the settlement, Microsoft can continue to use the SkyDrive name for a reasonable period of time while it implements a new brand.

BSkyB is a UK-based satellite broadcaster, Internet provider and telephone services firm. It does not make or sell any cloud-based storage services, nor is it clear how the firm could have obtained multiple trademarks for a term as general as “sky.”

Perhaps it would be helpful to remind ourselves of the basic criteria a mark must meet to be capable of being registered as a trademark under English law.

Providing the mark meets the basic requirements under the Trade Marks Act 1994 (principally that the mark is distinctive - or capable of distinguishing - one proprietor’s goods or services from another’s and that the mark is capable of being represented graphically), there’s nothing stopping an application being made to register the mark in relation to several categories or ‘classes’ as they’re known.

Amongst others, the word “Sky” is registered in 2 classes for services (as distinct from goods) - class 38 and class 42.

In its July ruling, the UK court noted that a survey of consumer found that some people did indeed assume that SkyDrive was a BSkyB brand and that such people “should not be regarded as especially unobservant or lacking in ‘circumspectness’.”

Another key point is that “Sky” isn’t just a trademark of BSkyB – it’s their trading name.

On reflection, then, it’s not tough to see why Microsoft’s use of the word “Skydrive” infringed Sky’s trademark.

So why did Paul miss this?

It took just a couple of minutes to look up on the trademark register exactly what classes Sky have registered marks in and compare that to the list of classes available for services.

On top of that, it would have taken a matter of seconds to identify that “Sky” was the trading name of BSkyB.

On the Windows Weekly podcast, Paul often bemoans slipshod and lazy bloggers who fail to do their homework but then have the audacity to sully the internet with their inferior writing. He’s certainly got a point (particularly in the tech sphere) but the record has worn rather thin. Following this latest blooper, maybe it’s time Paul became a little less critical of others and a bit more self-reflective.