Actually, they go one better – desks with treadmills built into them!

I blogged about the potential benefits of lawyers using standing desks earlier this year, so when I spotted the story below on RoF this week, my little eyes lit up. 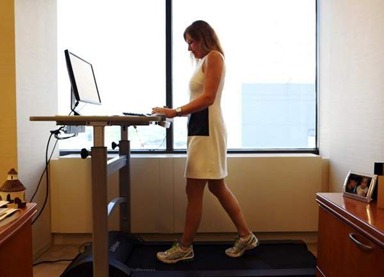 Ok, I grant you the idea of the average partner in a law firm using a treadmill desk on a daily basis is a little far fetched.  But the health benefits for people who usually lead such a sedentary and high stress lifestyle must not be overlooked.  Those extravagant client lunches have quite an effect on a lawyer’s waistline and billing more hours doesn’t necessarily burn more calories.

Besides, walking for a while at your desk has got to be a lot more efficient at burning fat compared to stressing over an ethical dilemma or having an anxiety attack because of an undertaking the firm has just given.

A US firm is tackling the threat of morbid obesity that comes from slouching in front of a computer all day or being American by giving its lawyers treadmill desks. Ohio firm Taft Stettinius & Hollister LLP fee-earners can now work-out while they work, lose pounds while they earn dollars, and die of a heart attack while they draft a typo-filled facilities agreement on a 10% incline.

Partner Mary Rust, pictured, told Cincinnati.com that she uses her treadmill desk for between one and four hours a day to run or walk while she works.

Rust, seemingly delighted that she spends such a large proportion of her life in her office that she has to sprint in it to stop her limbs wasting, said, “There’s very little time in the day that I can’t spend on here.”

It’s just as well most female fee earners have shunned high heels for flats then.

But does this mean that training shoes are the next inevitable step in legal office footwear?