The company behind Marmite has donated £18,000 to the RSPCA after some viewers said its latest advert trivialised the work of animal welfare agencies.

"Marmite have put their money where their mouth is," said Matt Cull, a fundraiser for the Royal Society for the Prevention of Cruelty to Animals.

The TV advert, in which a spoof rescue team "saves" neglected jars of Marmite, has now prompted around 400 complaints. 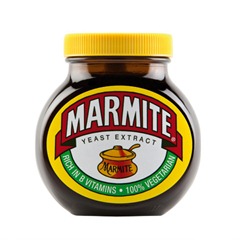 You can’t account for the crazy sensibilities of the viewing public. There are a lot of over-sensitive people out there just itching to make a complaint about the first thing that pops into their tiny minds.

"Marmite have offered us £18,000, which is how much it costs to run our inspectorate service for one day," continued Mr Cull.

"This will make a massive difference to the animals and we are very grateful for their generosity."

Granted, the ad is slightly off the wall (aren’t the best ones always like that?) but any rational, right-minded person surely can’t regard it as offensive. And look at the good it’s done. It reminds viewers of the brand (heck, I’ve got a jar of Marmite in the cupboard), it’s got people talking and has raised the profile of animal charities and the RSPCA has even got some money out of it. Can’t be bad.

Besides, Marmite the Law Actually bunny gave the ad the paws up so it must be good.