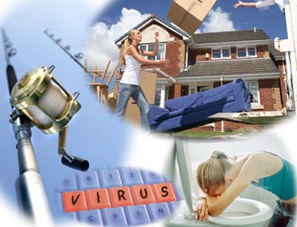 I’ve neglected this blog for longer than I had intended in the last couple of weeks and I’m probably not going to get round to a whole lot of blogging for the rest of this month either. Regrettably, the Michael has been beset with a number of traumas recently, none of which have been particularly pleasant.

Just over a week ago I was hit with a computer virus outbreak, which nearly hosed my entire system. In the end it necessitated a clean install of Windows just to be completely sure all traces were gone. To be fair, this one was largely self-inflicted so have no one else to blame... damn uTorrent!! Oh well. To make matters worse, after a quick trip back home to Cornwall last Saturday, I went down with food poisoning on Sunday night and am only getting back up to speed now. I’ll spare you the details but believe me, it wasn’t pretty!

On the plus side, though, we’ll be moving house late next week so will have a change of scenery and a bunch of other things to occupy me for a while. That’s after another trip down to Cornwall for dedicated fishing expedition, though. Can’t wait!

Quite when and where I’ll next be blogging from is hard to say but a June hiatus isn’t exactly ill-timed as the blawgosphere naturally winds down after the exam period. Whatever you’re at this summer have a good one and enjoy the sun – as and when it graces us with its presence, of course!