Showing posts from June, 2011
Show All

Shoplifter smiles for the photographer 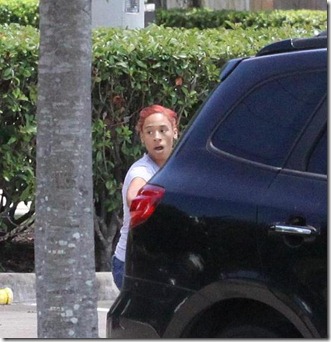 From Houston Press Blogs 24/06/11:
You're an athletic woman who likely can easily outrun any employee of a mall shop. So even if they're scrambling after you yelling "Shoplifter!!" as loud as they can, you know you can make it to the parking lot and freedom.Just one tip: Don't have your escape route go right by a professional photographer taking pictures.One Sugar Land shoplifter didn't follow that guideline, and now police have a series of fine photos catching her escape as it happened. At no charge!Photographer Barry Sigman ... [said]... "I saw somebody run past me followed by another person who was yelling, 'shoplifter' over and over again.""At one point she threw some things into the bushes then ran 20 yards, and for some reason she went back for them. That's when I captured her face on my camera."What did she throw away and go back for? Maybe she ditched the goods in an attempt to avoid detection and then indignantly th…
Post a Comment
Read more

Just one of those days…

Wimbledon concern over slips & trips – just a load of balls? 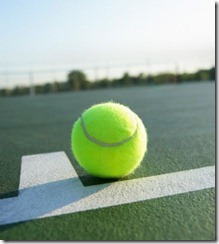 From the Telegraph 21/06/11:
Thousands of tennis fans were denied the chance to watch Andy Murray's opening match at Wimbledon last night as the outdoor screen was turned off for the first time in the tournament's history because of the weather.Wimbledon spokesman Johnny Perkins said: "The hill has been closed because of the slippery nature of the grass while it is so wet."It is a health and safety issue. We just can’t have people slipping and sliding and falling off the thing and breaking their ankles.We potentially could have large numbers of people slipping and sliding all over the place."Still, that doesn’t seem to concern local authorities when they don’t bother gritting the pavements in winter.
The announcement, made on a tannoy system as Murray warmed up, was met with groans and boos by the crowds who had gathered on the hill, a favoured viewing spot for those who do not manage to get tickets for the main courts at SW19.Um – excuse me: you can’t make…
3 comments
Read more

What the flock? Farmer spray paints sheep as moving billboard 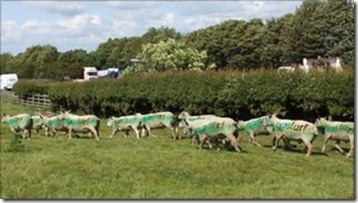 From BBC News 20/06/11:
A North Yorkshire farmer has sprayed the logo of his business on the side of a flock of sheep as a way of getting round planning laws.James Metcalfe, from Dalton, near Richmond, is blocked from putting up billboards to advertise as they could distract drivers on the nearby A1.He has painted the logo of his turf business on the side of 20 of his newly-shorn flock.Mr Metcalfe said: "They were quite happy with it."He added: "We wanted to put up a sign next to the A1 but planning is quite difficult.But Mr Metcalfe, who part owns Tyas Turf, said there was a flaw in his enterprising plan because the animals preferred to shelter at the top of the fields rather than next to the prime location next to the A1."They are not trained to stand still," he added.Ah – that could be a slight hitch then! And I doubt concrete boots for the sheep would go down very well with animal rights activists!Thinking about this, I’m not sure what’s more distracting to…
Post a Comment
Read more

Tiger bread and client care: what can law firms learn? 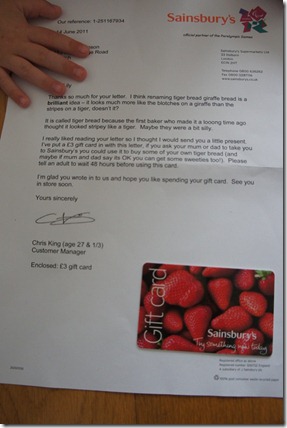 In case this one passed you by, here’s the abridged version. Wandering around Sainsbury’s one day, 3 and a half year old Lily was curious why tiger bread was not called giraffe bread. It’s a fair enough question from a perceptive child. So, thinking what the heck, she wrote Sainbsury’s a letter with her parents’ help.Sainsbury’s wrote a very pleasant letter back, agreeing with Lily that the markings on tiger bread look more like those of a giraffe than those of a tiger, explained the background of the name and enclosed a gift card  for good measure.   It’s proven a pretty shrewd move on Sainsbury’s part as they’ve garnered no end of good PR from this story going viral.So, Sainsbury’s deserve a good ol’ slap on the back for that one.  But it got me thinking: what if the same thing had happened with a law firm. Would they have entertained a letter from a curious child so readily and warmly? I realise the customer bases are different (though not that different); both serve the public and…
8 comments
Read more 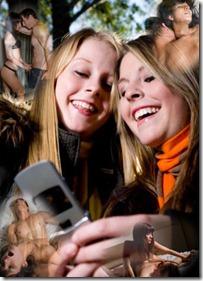 From Motherboard.tv 09/06/11:
Obviously everyone knows what sexting is, but I would just like to explain it because I send these articles to my grandmother, and I don’t want to have to break down sexting to her face-to-face.I don’t think anybody’s grandmother needs to know what sexting is. If she wants to swap X-rated polaroids with the rest of the church congregation that’s her business, but camera phones are just too much for the over 60s to cope with – particularly when there’s nakedness involved.
Basically, you take about a 100 pictures of your a*s in cute underwear and then one comes out good so you text it to a dude. ... The whole point of sexting is that as soon as the recipient gets it, they will speed over to your house for some hot sex.As with any type of social exchange, there is a certain etiquette that needs to be followed.Oh really?
For starters, don’t send a sext to someone who might not be down. “not be down” ... I’ve no idea what this means.  I’m guessing it’s …
6 comments
Read more

A pizza the action 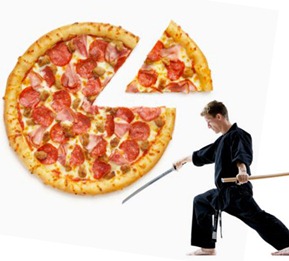 From Stupid Criminals (Discovery.com) 30/05/11:
Wynika Mason ... had a beef (we can't verify if that is a figure of speech or an actual topping in the dispute) with employees at a Louisville Pizza Hut.Witty. Really witty.
Suddenly, out of a sheath [shouldn’t that be ‘scabbard’?] she pulled a full-sized sword, apparently intending to go all medieval on the workers. Unfortunately, her threat oozed [really – it ‘oozed’? I didn’t know threats did that] beyond her intended victims and spread to her fellow pizza patrons. Giant swords are like that.Her brother diffused the situation before police arrived by disarming Wynika and placing the sword in his car. Just the same, once the authorities arrived our would-be Captain Jacqueline Sparrow [oooh, witty] was arrested for disorderly conduct and menacing.Really? Is that all?  For taking a sword to pizza hut?I wonder what she’ll raise in mitigation.  The fact she was planning to order a thick crust?  The restaurant's own cutlery was …
2 comments
Read more

From Digg:Oooh!  Meow!  And who said parents should take the moral high ground when disciplining their children? I hate to think what’s going to happen to that kid when he next crosses the school playground!!
Still, every child has to learn their lesson, right?
4 comments
Read more

Hyperglycaemic that is.  Allegedly. From Money.msn.com 03/06/11:
A Philadelphia woman is suing Dunkin' Donuts, saying a worker mistakenly put sugar in her coffee, which ultimately caused her to go into diabetic shock.There’s nothing like bringing a negligence claim against a friendly barista doing a good deed in the city of brotherly love, is there?
Danielle Jordan's lawsuit claims she asked for artificial sweetener to be added to her coffee during a June 2009 visit. Jordan claims she downed the drink and experienced dizziness, light-headedness and ended up making an emergency trip to the hospital.A legal liaison for the Canton, Mass.-based doughnut chain told the Philadelphia Daily News she couldn't comment on the case. But she says employees only provide customers with the order they ask for.Jordan's lawyer, Kenneth Rodgers, says his client couldn't tell from the taste of the coffee that she got sugar instead of her preferred artificial sweetener. He says she…
6 comments
Read more

Ouch–that looks painful From espnf1.com 04/06/11:
Sebastien Buemi ran over a spectator during a Red Bull demonstration event in Japan which was being held to raise money for tsunami victims.Ouch – talk about kicking a country while it’s down!
Buemi was carrying out his usual routine when a spectator decided to take a short-cut across the track from behind a bridge. Unfortunately, he ran straight in front of the Red Bull, but a last-second jump as the car hit him probably saved him from serious injury.Or slicing him clean off at the ankles.
Fortunately, neither Buemi or the spectator were injured.Phew!! Does that mean there won’t be another car compensation claim clogging up the courts? Incidentally, the various reports I’ve read all say it was a Red Bull that Buemi was driving; going back to his Scuderia Toro Rosso next weekend in Canada will no doubt seem like a load of bull.
See what I did there?  Sigh.
4 comments
Read more
More posts