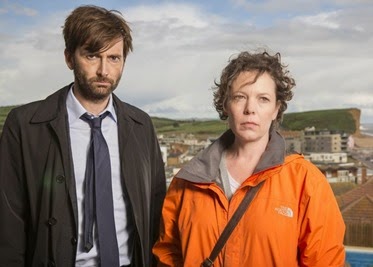 I came to the Broadchurch party much later than most (in fact, only since earlier this year), but I’ve watched series one and two twice now. It’s one of the best things I’ve seen in a long time.

For what it’s worth, I’m also giving Gracepoint a bash – the bizarre and spectacularly bad remake of Broadchurch, re-engineered to be spoon-fed to American audiences. From the uninspiring location, poor casting, and a complete lack of chemistry between any of the actors, it’s a very poor imitation. On top of all that, David Tennant’s laughably bad American accent - which slips more often than it stays - pretty much drives that final nail home. Seriously: just don’t bother. I bet Tennant wishes he hadn’t as well. 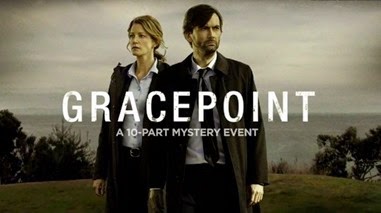 10-part mystery? The only mystery is why it was commissioned in the first place.

Now the dust has settled from series two of Broadchurch, its creator, Chris Chibnall, has come out in combative fashion to defend his baby from the tirade of indignation produced in response to certain aspects of Joe Miller’s trial.

This series of Broadchurch, just like the first, garnered plenty of media coverage and opinions. After the early storms (Mumblegate! Music-too-loud-gate! Ratings-wobble-gate!), […] there’s one issue I do want to address: Legalgate!

There’s been plenty of discussion over the accuracy of our portrayal of the trial process. Some argued our court story would never happen. Our research and advisors suggested otherwise.

The story was devised as the result of months of research and consultation. […] The shape and detail of the series was based on their responses. As I wrote, all three advisers (legal and police) were continually consulted. They read and gave notes on every script.

Broadchurch has always been about the impact of crime, on all those affected. The research made me wonder how our characters would fare under the rigours and vagaries of a trial. What’s the emotional cost to witnesses and the families of victims in an adversarial system? It was a story I hadn’t seen and one I wanted to explore.

I knew it would be a big risk to develop and reshape the show this way. […] That choice meant complex procedure had to be compressed. […] Murder trials often last around four weeks. So exact process and wording has to be dramatised.

That’s not a scandal: it’s a legitimate dramatic technique. Drama is not a literal portrayal of events. It’s a depiction, it’s impressionistic.

Oooh. I can already sense criminal lawyers up and down the country smarting over that final comment. A TV show daring to stray from a faultlessly accurate portrayal of the English criminal justice system? Whatever next?

I’m not sure Chibnall needed to dignify the critics’ objections with a response, frankly. I don’t think I would have. People are always inclined to get their panties in a bunch over these things and lawyers are more guilty of it than most. Social media makes it all too easy.

Despite all the noise, despite the fact we took a big creative risk in our second series, our audience of more than nine million came with us, and stayed. […] Some enjoyed the second series less than the first: that’s definitely allowed. We’re now working on the third series. It will be different again. There’ll be plenty more to discuss.

So it’s pretty clear that Hardy didn’t get into that taxi at the end of series two (he finally buttoned his collar and straightened his tie for nothing, then).  But where might the story go from here? Here are some of my thoughts.

The Sandbrook trials are held. There’s got to be at least one ‘not guilty’ plea in there. The show’s anything but predictable after all.

There’s a significant new crime to solve (or at least cause for some more off-duty sleuthing by Hardy and Miller). Given that the Tennant-Colman interplay seems to be the backbone of the show - and the only thing to be universally praised throughout the two series - the storyline of series three has to provide enough room to accommodate more of Hardy and Miller’s inimitable set pieces.

Joe Miller comes back. How could he not? And I’ve a sneaky feeling he’ll want access to his kids. Maybe he’s also going to want Ellie to pay for her role in banishing him from the town.

Joe Miller’s guilt or innocence is confirmed. For a while now, I’ve had an inkling it was Tom Miller who killed Danny and Joe confessed to take the rap for his son. Stranger things have happened. Or what if Tom’s younger brother, Fred, did a ‘Bobby Beale’ on poor Danny? Ok – that one’s less likely, I admit.

The postman killed Danny. What were he and Danny arguing about back in series one? That was never explained, was it?

The prosecution’s contention was correct and Mark Latimer did indeed kill his son and it was Nige Carter (‘that other bald bloke’) who was seen moving the body. Mark’s ‘I-was-writing-a-letter-to-my-wife-saying-our-marriage-was-over’ thing, all after a one-off bonk with another woman on the back seat of her car, never rang true.

In a similar vein, Hardy and Miller were having an affair, and did plot to put Joe away. But that still doesn’t explain who killed Danny.

All of the protagonists were responsible for Danny’s murder – a la Murder on the Orient Express? You never know.

Whatever series three has in store, I sense it’s going to be quite a ride.