Showing posts from April, 2012
Show All 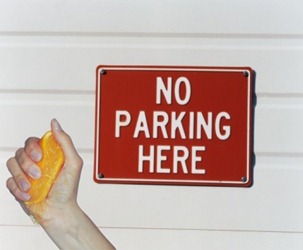 But we’re not talking a dinged door or scratched paintwork during a parking manoeuvre gone wrong. Oh no. It’s something far worse!!

From the Huffington Post (Weird News) 26/04/12: There are worse ways to die, but you probably don't want to think about them, especially if you're a guy. A Chinese man was reportedly killed last week when a woman squeezed his testicles until he collapsed during a fight over a parking space.Was a slap round the face just not enough then? An unidentified 41-year-old woman in China's Haiku City in the Hainan Province rode into town on her scooter to pick her child up from school. The woman tried to park in front of a local store, but the store owner, the 42-year-old victim, refused to allow it, China News 24 reported.A scooter? Surely she could have found somewhere else to leave it? Heck, if her hand muscles are anything to go by, she could have popped her two-wheeled hotrod on her shoulder and walked to the school gate to pick up her kid! The…
2 comments
Read more

On-shoring legal work is more popular than ever 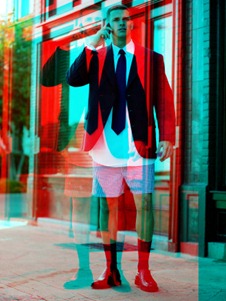 (No matter what RoF call it!!). From Roll on Friday 05/04/12: Simmons & Simmons is joining the outsourcing race by opening an office in Bristol. The new outpost will be restricted to real estate, projects and dispute resolution work, and will initially have between 15 and 20 lawyers on the ground. Outsourcing to Bristol. From London? Does that qualify as ‘outsourcing’? I know Bristol might seem to be a little off the beaten track to some (largely those who rarely step out of the capital for months at a time) but it’s really not a foreign country!! According to reports, the firm will be sending a couple of partners and a bunch of senior associates to Bristol to launch the new practice. And the verdant countryside, cheaper cost of living and extra-strong cider will probably be enough to attract a few away from the City. However in the long term the development seems bad news for those doing low key real estate, projects or dispute resolution work and who want to remain in London.…
Post a Comment
Read more 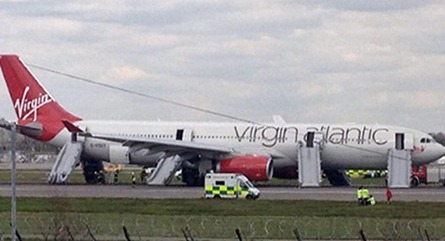 From the Express 17/04/12:Passengers forced to evacuate a Virgin Atlantic jet told last night how panicked cabin crew screamed “Get off as quick as you can” after making an emergency landing at Gatwick. One claimed the evacuation from the Airbus A330 was panicky, with one of the crew “screaming like a banshee” after an on-board alarm was triggered in flight.Erm – better safe than sorry, surely? Absolutely – but stop calling me Shirley.   (Sorry – couldn’t resist – I love Airplane).
As a long time (and enthusiastic!!) viewer of ‘Air Crash Investigation’* and the downed flight episodes of ‘Seconds from Disaster’*, some of the passengers on board flight VS27 don’t seem to realise how lucky they were. The cabin crew had a duty to get everyone off and away from the plane as quickly as possible. A bump and a scrape here and there doesn’t come into it when the crew were doing their darndest to prevent anyone on board from being barbecued alive. When the report came on the TV last night in …
Post a Comment
Read more 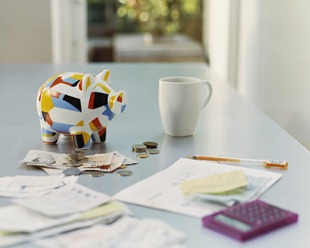 From STV11/04/12:A woman has been conned out a three-figure sum of money by a bogus PPI claims company.The 42-year-old received a phone call to her house in Telford Drive, Edinburgh on Wednesday March 28 from someone saying they were from a PPI claims company.

They told her she was eligible for a refund and she was told to pay them a three-figure sum of money through UKash vouchers. The victim has not received a refund.A spokesman for the [Lothian and Borders Police] force said: "The issue of PPI refunds is a very current topic and criminals will look to exploit any new opportunity to obtain money or personal details from members of our communities.Tens of thousands of successful PPI claims have already been brought, providing redress for victims who have been mis-sold payment protection insurance. It would be a great pity if all the good work done by firms bringing claims for payment protection insurance on behalf of their clients is undermined by the fraudsters who are swindlin…
2 comments
Read more

Vinnie Jones’ CPR given the all-clear 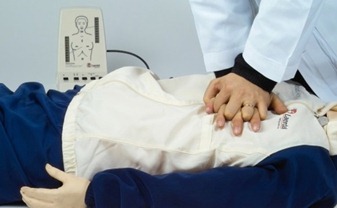 From the Guardian 11/04/12: A TV campaign featuring Vinnie Jones teaching people how to resuscitate someone, set to the rhythm of the Bee Gees' Stayin' Alive, has been cleared by the advertising watchdog despite complaints it featured a medically unsafe technique The Advertising Standards Authority received 20 complaints that the ad, in which Jones teaches the correct timing of the technique by performing CPR* to the song, is harmful and likely to encourage unsafe behaviour as he is shown performing it incorrectly.That’s Cardiopulmonary resuscitation – not the Civil Procedure Rules!! In response to the ASA, the BHF said the UK has appalling survival rates of cardiac arrests that occur outside hospitals and the campaign had raised awareness of life-saving techniques, with 15 reported instances of people applying lessons from the ad with a positive outcome.So why are the UK’s statistics so poor? Are we just untrained at life-saving, not caring enough or too scared of getting sue…
Post a Comment
Read more 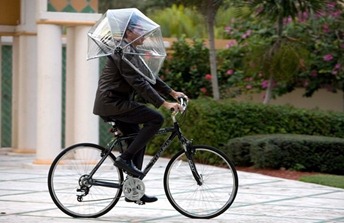 From the Telegraph 10/04/12:The Nubrella, which resembles a bubble wrapped around the user's head and shoulders, works by strapping on a shoulder support and extending a canopy around the head. Weighing just over 1kg, it costs £40 and comes in either black or see-through style.Inventor Alan Kaufman, 49, from Florida, said: "The major advantage is the wearer doesn't have to carry anything when not in use as it goes behind the head like a hood.Hmmm. Possibly.

In high winds, though, I think it’s still going to suffer from the same trouble as conventional umbrellas, only now it could garrotte you into the bargain!  If you got a strong and unexpected gust of wind up under the Nubrella, you might suddenly find yourself generating more lift than a Boeing triple 7 on take-off; there’s no telling where you’ll end up or whether your head will still be connected to your body in any meaningful way when you land.  Cue the neck injury claims, eh?Talking of which, aren’t pedestrians…
Post a Comment
Read more 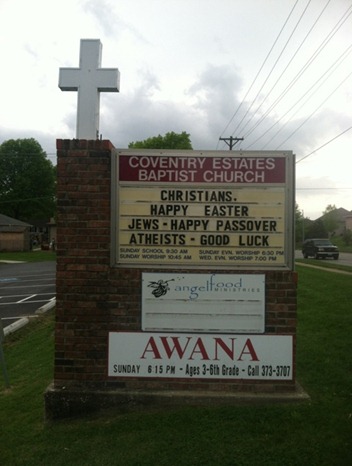 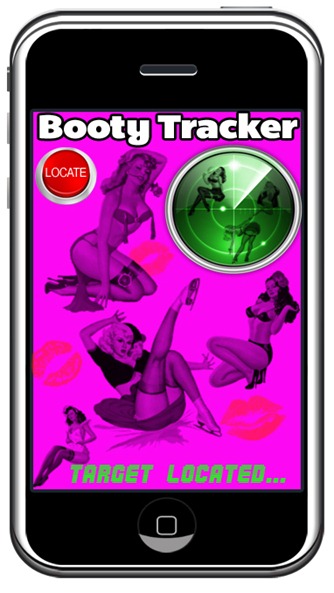 From Digits – a blog from the Wall Street Journal 31/03/12:The developer of a controversial mobile app that used data from Facebook and Foursquare to reveal the location of nearby women defended its intentions Saturday after drawing a firestorm of criticism over privacy concerns.On Saturday, Foursquare cut off access to the “Girls Around Me” app that made it possible to view the location of women on a map and their publicly available data and photographs from Facebook. A number of blogs ... question[ed] ... whether the app encourages stalking.Oh surely not. You can’t possibly be suggesting the internet can be used for spurious ends and that location tracking and prolific (and careless) social media use constitutes a privacy risk? What’s the world coming to?The Russian app developer, i-Free Innovations, fired back with a strongly worded statement sent to The Wall Street Journal, calling it “unethical to pick a scapegoat to talk about the privacy concerns. We see this wave of negative a…
1 comment
Read more 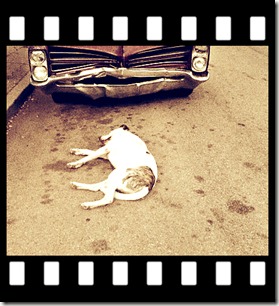 From AOL Money 16/03/12:Direct Line pet insurance has revealed that more than a quarter of the dog and cat road accident claims it settled last year occurred in just 10 locations.Ouch. You might want to keep your furry friend on a leash if you live anywhere near those locations then!Still, maybe those who live in or around those areas are just more predisposed to settling claims?   Just a thought…Pet owners in the Berkshire town of Reading made the highest number of claims for dogs or cats injured in a road accident, followed by Redhill in Surrey and London.I thought Reading was a city? No?Ah – thanks, Wikipedia – I see it IS a town. AOL Money – I take it all back! Despite settling pet road accident claims in 104 of the UK's 124 postcode locations last year, Direct Line revealed that 27 per cent of the 815 claims closed occurred in just ten hotspots.1. Reading2. Redhill3. London4. Guildford5. Bristol6. Glasgow7. Edinburgh8. Portsmouth9. Southend10. Hemel HempsteadPortsmouth and So…
Post a Comment
Read more 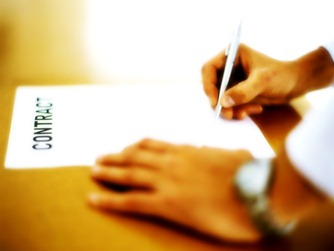 I pray thee, good reader, let’s retire:The day is hot, the OFT abroad,And, if we meet, we shall not scape a brawl;For now, these hot days, is the mad blood stirring.… or something like that. From the Metro 23/03/12: Some websites ask users to wade through more words than a Shakespeare play in accepting the ‘terms and conditions’, a new investigation shows. PayPal, for example, demands visitors must read and accept 36,275 words of Ts&Cs, leaving Shakespeare’s longest play Hamlet trailing at a mere 30,066. OK. I admit having such a long set of standard terms is “ridonkulous” (that’s a specific legal term of art, you know) but equally crazy is comparing the word-count with the works of Shakespeare. Why Shakespeare? Your average online consumer is probably more likely to read several thousand words of terms than any Shakespeare, after all.   Apple’s iTunes is not far behind, with 19,972 words of legal agreements, more than Macbeth at 18,110. Hmm… “words of legal agreements”… I’m not s…
2 comments
Read more

Finally, Google’s sense of humour has returned.I love Chrome, and I’ve used it every single day for a few years now. As far as I’m concerned, no other browser even comes close.So what could be better than new functionality which allows you to be 50% more productive by enhanced multitasking. Oh yes, the aptly-named Multitask allows you to connect two mice to the one computer and enjoy twice the productivity by having one in each hand. (Mice, that is!).Don’t be a sceptic – after a short period of time, it feels ‘completely natural’! As architect, Clancy Johnson, says on the video, although the results of his job can often mean the difference between life and death for clients, Chrome Multitask takes the stress out of his work as he no longer has to think too hard about any one project.Hell – we could all use some of that, right?  You can even share your computer simultaneously with your ‘significant other’ – just as devoted couple Jennifer and Carl MacDonald do. Their fights over who go…
2 comments
Read more
More posts