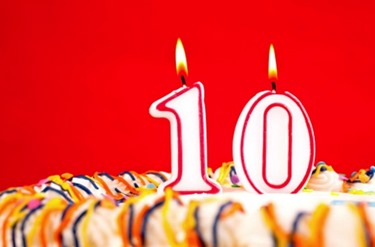 Well, now this blog has reached double figures, I really can believe it. It feels like ten years.

I started Law Actually as a bit of lark; a creative outlet from the travails of studying law. It was probably my contrarian and rebellious streak coming out, plus a procrastination device to distract myself from preparing for seminars.

Ten years later, it feels like I’ve seen it all come and go in the blogosphere. (And I’m getting an increasing number of grey hairs to prove it.) The web and the world have moved on considerably since blogging was considered de rigueur. Now it feels like it’s something more to be ashamed of than celebrated and the sense of community in the ‘sphere has long since disappeared. I think I’ve grieved long enough over that loss. Life and things move on. I get it.

One thing I’ve found over the years is that I enjoy blogging more when I take it less seriously. People blog for all reasons, but mine is a sort of creative catharsis. I used to get as much (if not more) pleasure from playing in Photoshop creating a graphic to accompany the text as I did from the writing itself. I think my skills on both fronts have improved appreciably from those early days.

I’m conscious that I’ve subjected my readers and this blog to a lot of crap during the last decade. A few years back, it was little more than a bawdy-house for SEO where you couldn’t turn around for all the sponsored links and posts. Apologies for that. Sometimes blogging felt more like a chore than a pleasure in those days.

I’m going to make no predictions as to what the future will hold for me or this blog. But if I hang about in the blogosphere I want it to be on a no-strings, casual basis. If I post, I post. And if I don’t – well, it’s not the end of the world.

There are a lot of memories tied up in the thousand or so posts I’ve published. I’ve often found a lot of pleasure looking back through my archived posts; they stir up at least as many memories as a diary could have captured. And that’s pretty special.

So, thanks, Law Actually. In a bizarre sort of way, you’ve been a good, comforting friend over the years. And I’m really glad you’re here.

Have a great birthday. You deserve it.