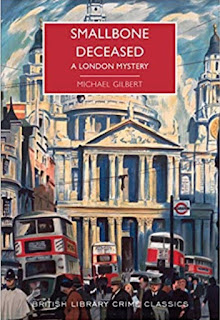 Back in late 2015 I discovered the range of classic crime books that are being re-published by the British Library.

Aptly titled ‘British Library Crime Classics’, these books are a mixture of whodunits and other formats of the crime genre written during what it recognised as the ‘golden era’ of crime fiction — that is, the period between the two World Wars. The books published include those written by a number of eminent authors of detective fiction, including E.C.R Lorac, John Bude, J. Jefferson Farjeon, Freeman Wills Crofts and George Bellairs.

The list of BLCC titles has grown to nearly 80 now — and I’ve read about three quarters of them. Most are good to very good, a few are sensational, with just the odd let down (‘Somebody at the Door’ by Raymond Postgate immediately springs to mind for the latter category). I eventually had to cast that aside, not fully read.

Aside from the BLCC range, I’ve also become an avid fan of George Bellairs’ Inspector Littlejohn mysteries — and Bellairs now ranks among my very favourite authors.

Smallbone Deceased is a whodunit written in 1950 by Michael Gilbert — who was a practising lawyer himself. The story is set in a London law firm, Horniman, Birley and Craine, where a body is discovered in one of the large deed boxes. It’s as good a place as any in which to hide a body (and it certainly beats hacking the body up in the lavatories and depositing segments of the cadaver into lever arch box files).

I particularly appreciated the book’s legal setting as well as a number of elements of the story’s backdrop. But its appeal is by no means confined to those with experience of legal practice; it’s a corker of a crime novel and is written with a well-judged humour and wit (something that Alan Melville didn’t quite get right in my view in his book, Quick Curtain).

I’m not going to review the Smallbone Deceased per se. There are plenty of reviews of it out there and I’ve nothing particularly remarkable to add.

So, without further ado…
There’s many a time when I’ve been working on a particularly fraught matter that I’ve thought I’ll die ‘in harness’, where someone will come in the next morning and find me slumped over my keyboard — cold, stiff and lifeless.

Get the violins out, people!

I think all of us in legal practice can relate to that. In fact, shortly after reading the book, I paraphrased this quote about the least urgent matter ‘going to the wall’ as an explanation to a colleague as to why I hadn’t done something. It beats a bold-faced lie, I suppose.

Every law firm boasts one of these characters.

What an image! I’ve been guilty of slurping (and spilling) soup over a draft contract on many occasions in the past — although these days I tend not to eat at my desk.

On a related note, I tried a Sainsbury’s taste the difference fish cake the other day — the first fish cake I’ve eaten since my home-made attempt in June 2008 when I managed to give myself chronic food poisoning. Sadly, this latest fish cake was a real disappointment; it was basically a fish cake shaped potato croquette; you wouldn’t have known it was supposed to have a fishy theme at all. It was so bad, the other one was deposited without grace or ceremony into our compost bin.

We have a pigeon who loves to perch on the sycamore tree in our front garden and make his toilet there — at any time of the day.

Don’t we all feel like this sometimes? (In my case, most of the time.) And what a fabulous word: ‘pettifogging’. I was introduced to it through a George Bellairs novel, no less. And it was used in the context of, yes, you guessed it — a lawyer.