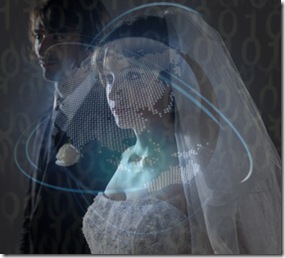 In keeping with the concept of the ‘virtual veil’ which I propounded in my previous post, I thought this story was worthy of mentioning too, despite the fact it’s been doing the rounds for a while now and is probably best considered ‘old news’.

The virtual veil in question here is the one worn by a virtual bride who married the avatar of her newly married husband in a second wedding after their real-world one in St. Austell, Cornwall in 2005. Having first met in the online game Second Life, they eventually met up in person and subsequently married. However, the happy days weren’t to last:

She claimed that David Pollard, 40, committed adultery with the animated woman and said that it is the second time she had caught his character cheating on her.

In February last year, she said that he was having sex with an online call girl character and she even hired an online private detective in the game to investigate his adultery.

Mrs Pollard said that she discovered her husband's most recent online infidelity in April after she had awoken from an afternoon nap and caught Mr Pollard in a compromising position on the game.

She said: "I caught him cuddling a woman on a sofa in the game. It looked really affectionate.

"I went mad - I was so hurt. I just couldn't believe what he'd done," she said. "I looked at the computer screen and could see his character having sex with a female character. It's cheating as far as I'm concerned.

When I first earmarked this story as ‘bloggable’ material over a week ago, I failed to notice that the couple had in fact met and married in St. Austell, an area of Cornwall not a million miles away from where I grew up. For what it’s worth, it’s also an area of Cornwall best avoided if your impression of the county is one of unspoilt scenic bliss. I consider myself lucky to have lived just sufficiently far away from the town so as not to be stifled by its oppressively depressing and ungainly nature. Seriously, it’s a dump.

My second reason for finding this story interesting is the fact that the regulation of virtual worlds is an area of law which I find fascinating and, I hope, remains a potential topic for my dissertation. It’s certainly an area which is wide open as to quite how the law should handle the regulation of virtual events and the inter-relationship between the actions of real-life humans and their online personas. Effectively being a parallel virtual-universe, virtual worlds are potentially plagued from nearly as many issues as are encountered in the real world, ranging from intellectual property infringement to crime.

The virtual veil concept I spoke of in my previous post is applicable here too. Some people, including Mr Pollard (given that he was caught with his virtual trousers down) would (probably subconsciously) argue that there IS a virtual veil in operation which clearly segregates his online persona from that of his real-world one. His wife, no doubt, takes the converse view: for these purposes, the personas are one and the same. By cheating online via his avatar, the husband is just as unfaithful and culpable as if he cheated in real life.

It would be interesting to know whether Mr Pollard thought through the gravity of his actions and the potential consequences that might flow from them as seriously and thoroughly as if he went and embarked on an affair or paid a prostitute for sex, say.

The article points out both Mr and Mrs Pollard’s differing views:

"But he didn't see it [the online sex] as a problem, and couldn't see why I was so upset.

"He said I was just making a big fuss, and tried to make out it was my fault for not giving him enough attention.

Is it right to regard Mr Pollard morally culpable for his avatar’s antics when he, Pollard, didn’t physically do anything to constitute an act of infidelity? Is there any difference between conducting a virtual affair and simply having real-world thoughts of infidelity which are not acted upon? Was he not just victim to the virtual veil which clouded his judgement and left him blind as to the dividing line between reality and the virtual world? Did he not just naively mislead himself into believing, because of this mysterious virtual veil, that his online acts would have no real-world consequences? While I think I know where the consensus of opinion lies in response to these questions, it remains a contentious talking-point.

Sympathisers might, at a push, try and argue that Pollard merely became inescapably immersed in the virtual world and got ‘carried away’ in the (online) atmosphere of it all and he’ll wake up some day soon, suddenly realising it was all just a huge error of judgement on his part? Well, it seems there’s little chance of that:

"[L]ater [Mr Pollard] confessed he'd been talking to this woman player in America for one or two weeks, and said our marriage was over and he didn't love me any more, and we should never have got married." Amy [Pollard] said her estranged husband is now even engaged to the woman he had an 'affair' with on Second Life – even though they have never actually met in real life.

But it gets worse. While Mrs Pollard might have been successful in getting her divorce, it seems as though she hasn’t learnt all of the lessons from this experience that one might have hoped.

[Mrs Pollard has] also found a new partner, who she also met online, while playing the fantasy role-playing game World Of Warcraft.