Flirtatious and Frivolous Festive Frolics – All Courtesy of Nigella 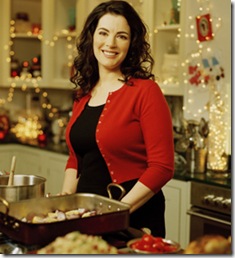 I’ve been working a great deal in the last week or so – much more so than I’d planned in fact. Sadly, this hasn’t been without compromise and my previous target of having my IT law paper written by Christmas now appears laughably over-optimistic. Still, I’m glad of the overtime and thought I’d better take advantage of the extra hours while they’re available.

Rather guiltily, I’ve not felt like settling down to my paper on returning from work of an evening and with my girlfriend also making the most of overtime, I’ve been amusing myself with some light entertainment on iPlayer. As well as catching up with the excellent Oceans series – which quite possibly stands as the most-watchable oceanic documentary ever screened – I’ve found myself tuning into the undisputed Domestic Godess - Nigella Lawson.

While I’ve been known to turn my hand to a few off-piste adventures in the kitchen – all culinary I might add - I wouldn’t describe myself as a gourmet. Equally, I initially found Nigella’s almost absurdly over-indulgent ‘wallowing’, to use one of her own words, in Christmas and all associated traditions, food and paraphernalia somewhat grating at times. But that hasn’t stopped me from continuing to tune in.

Perhaps it’s her brazen embracing of the season or her informal, easy-going manner in the kitchen – I don’t know. Nevertheless, Nigella’s deliberate OTT-style just hits the (culinary) spot for me. While you might initially grimace at her unabashedly erotic sensualisation of anything and everything in her kitchen, this soon takes on an entertainment value of its own. Once the celebrated domestic goddess gets into her stride, there are enough laugh-out-loud moments for this to be viewed as a comedy as she methodically and shamelessly romanticises ingredients and actions in equal measure. Coupled with the show’s seductive close-up shots and her trademark flirtatious glances at camera, half an hour in Nigella’s kitchen is almost a helter-skelter trip into carefree fetishist fun.

If that were not entertainment enough, Nigella also stands as a credible candidate for the ‘Queen of Alliteration’ title and, unlike the another oft-mentioned candidate Arlene Philips from BBC 1’s Strictly Come Dancing, Nigella’s sentences actually make sense.

Some of my favourites:

And some other corking phrases she’s come out with:

“This is no time for restraint”.

“It’s just sooooo gratifying and this gorgeous feeling is all too easy to achieve”.

And, perhaps most telling of all: “Viewers of a sensitive disposition”, she seductively giggled, “look away now”. The hussy.

After three episodes, I am left with a couple of questions though:

What was with Nigella’s leopard-skin marigolds which she used to manhandle the soaking turkey out of its tub?

And do any of the awkwardly staged ‘friends’ Nigella invites over to dinner, ever extend the courtesy and invite her back for dinner?