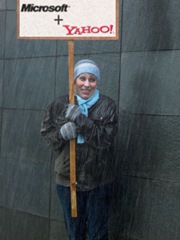 (WASHINGTON) — Microsoft Corp. has yet to convince Yahoo Inc. to agree to a friendly takeover, but the software company is already hiring lobbyists to help it convince regulators to let the deal — hostile if it has to be — go through.

Pity poor Microsoft – they just can’t seem to get this deal closed. One minute reports seem to indicate that progress is being made in their bid to acquire Yahoo; the next, they’re back to square one. But whatever the true state of play, you have to admire the typical Redmond tenacity. If one method fails – try another. So what’s next then - a campaign march?

Email ThisBlogThis!Share to TwitterShare to FacebookShare to Pinterest
Labels: Internet