uTorrent usage up - Limewire down 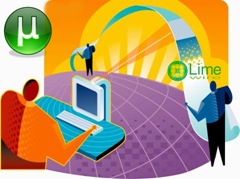 New data on the ever changing P2P landscape shows that the number of uTorrent users worldwide has more than doubled compared to last year. The BitTorrent client is most popular in Europe - with an install rate of 11.6% - and least popular in the United States, where 5.1% of the PCs have uTorrent installed.

From December 2006 to December 2007 LimeWire lost approximately 25% of its user base. By the end of 2007, 17% of all PCs in the United States had LimeWire installed, compared to 23.3% last year. Similar drops occurred in Europe, Latin America, and the rest of the world.

File sharing has been in the news a lot recently what with the growing concerns over net neutrality, packet shaping practices by ISPs and the ever-present issues of piracy.  I don't consider myself to be a massive P2P user and am very picky - I prefer to think of it as discerning - over what clients I use.  For instance, I've always kept Limewire at arms length for a variety of reasons and probably always will.  I've known others who have been badly 'bitten' in using it and after their experiences, have always steered clear.  That said, I also know of people who love it and have used it for years without a single problem.  Still, for me, the memories of Limewire being a hotbed for spyware and worse run pretty deep and have always refused to give in and install it on one of my own machines.

I do, though, use uTorrent on occasions and found it good, on the whole.  I have used others in the past, but uTorrent is the only one I return to.  I should point out here that I don't download files illegally but merely enjoy the convenience of a P2P client for downloading certain types of content. I find it surprising, sometimes, the number and and particularly the types of people that install and use peer-to-peer file sharing clients.  I also remember reading a couple of articles  about 3 years ago that predicted such clients would be dead in - you guessed it - 3 or so years time.  How wrong they were; while the file sharing landscape is a complex one that's always in a state of flux, one thing it certainly isn't is dead.