Putting the Letch in Lecturing 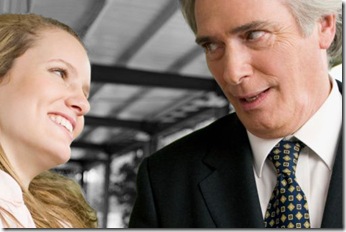 We've had a week of sex scandals in schools. Now Terence Kealey, vice-chancellor of Buckingham University, seems intent on stirring things up on the academic front.

Female students, he declares, are a perk of the job for male university lecturers – though they should look, not touch.

In an article for the Times Higher Education magazine on lust, part of a feature on the seven deadly sins of universities, Kealey wrote: "Normal girls – more interested in abs than in labs, more interested in pecs than specs, more interested in triceps than tripos – will abjure their lecturers for the company of their peers, but nonetheless, most male lecturers know that, most years, there will be a girl in class who flashes her admiration and who asks for advice on her essays. What to do?

Flashing a few literary allusions, he continued: "She doesn't yet know that you are only Casaubon to her Dorothea, Howard Kirk to her Felicity Phee, and she will flaunt you her curves. Which you should admire daily to spice up your sex, nightly, with the wife."

Unsurprisingly, Kealey’s comments have gone down very badly in some quarters, with his message being labelled as deeply misogynistic:

Kealey's comments were attacked by Olivia Bailey, women's officer at the National Union of Students.

She told the Telegraph: "I am appalled that a university vice-chancellor should display such an astounding lack of respect for women.

Human nature being what it is, I think it’s safe to say that a certain degree of surreptitious ogling goes on everywhere, not least by academics in lecture halls and seminar groups. What’s astounding here is that Kealey has come out and voiced – even encouraged his peers – to engage in a bit of rubbernecking over their more prepossessing students.

Several years ago during my first year at university, I personally witnessed certain females using their, ahem, charm to their tactical advantage.  This included one instance of a girl encouraging the course coordinator to allow them to transfer to the LLB once enrolled on another (lesser) legal course when she did not meet the pre-requisites to get onto the LLB.

Of course, I don’t know that it was because of her open flirting with said lecturer or whether he would have transferred her in any case. Either way, it’s an interesting strategy to get on the LLB if your A level results aren’t quite up to scratch.

Returning to the article, maybe Kealey just wanted to stir up a storm by writing a tantalising article or he was simply trying to be facetious. However you slice it, though, he’s certainly got attention, if that was his ploy. In any case, his candidness is definitely a bit of an eye-opener and however you feel about the thrust of his sentiment , I’m not sure his ‘look but don’t touch’ policy is enough of a sugar coating to appease the more easily-offended out there.