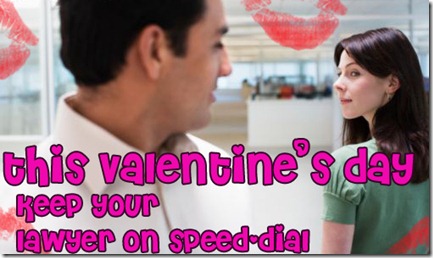 Lest any of members the blawgosphere should get a bit carried away with Valentine’s Day tomorrow, the following should serve as a grave warning.

A New Zealand woman was temporarily partially paralyzed by a hickey on her neck from her amorous partner, AFP reported Friday.

The 44-year-old woman went to the emergency department of Middlemore Hospital in Auckland last year after experiencing loss of movement in her left arm while watching television, doctors reported in the New Zealand Medical Journal.

Doctors concluded the woman had suffered a mild stroke but were puzzled about its cause until they found a small vertical bruise on her neck near a major artery, a hickey, she received a few days earlier.

"Because it was a love bite there would be a lot of suction," one of the doctors who treated her, Teddy Wu, told the Christchurch Press.

Oh yeah?  That’s what they all say!

"Because of the physical trauma it had made a bit of bruising inside the vessel. There was a clot in the artery underneath where the hickey was."

Wu said the clot dislodged and traveled to the woman's heart, where it caused a minor stroke that led to the loss of movement.

"We looked around the medical literature and that example of having a love bite causing something like that hasn't been described before," he said.

I sincerely hope the ‘amorous’ lover was warned off from giving any repeat performances as well.

And is it just me, or is ‘hickey’ just the worst word ever? I’m sure the French have a better name for it.

While I’m on the subject, Valentine’s Day has always struck me as being painfully clichéd but that doesn’t stop me joining in with the traditional rituals – in a romantic kind of way, of course.

Plus, I’ve never understood why some offices and other workplaces choose to mark the occasion with dress-down days in aid of charity, cheesy ‘auctions’, and God knows what else.  Thankfully, we’re not doing anything like that at work, and being the slightly grumpy and unadventurous sort, that suits me just fine.

But on a serious note, I’m really not sure employers should be doing anything to encourage their more lecherous employees to enjoy a good ol’ grope whilst the going’s good. I suspect Valentine’s Day is second only to Christmas ‘mistletoe incidents’ for surges in workplace sexual harassment complaints.

Still employment lawyers will no doubt welcome the business, as will those specialising in family & divorce when the inevitable catastrophe fully unfolds.

Oh I’m such a cynic!