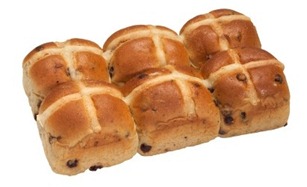 On the first day back at work after Christmas (the 3rd of January as I recall) I nipped into the local Sainsbury’s during my lunch break.  I was astounded appalled to see the special offer rack which is parked just inside the main doors was stuffed to the rafters with hot cross buns.  Seriously.

Three days into the new year and they’re trying to offload those bumptious bakery ballsaches on customers who, let’s not forget, were still reeling after the excesses of the festive season.  Talk about taking advantage.  I still had a batch of mince pies to finish off for goodness sake, not to mention my Ecclefechan tarts.  (They’ve all gone now, by the way – thank ‘fechan for that!!)

As each year passes I’m finding the commercial encroachment into the different seasons increasingly grating.  Why the big push to move onto the next event the second the current one is close to being over?  Why not milk the current season a bit more?  Customers would find it less offensive, I’m certain.

I saw Sainsbury’s (and some other supermarkets) responded to the media outcry at the time saying what they stock was in response to ‘customer demand’. I find that hard to believe – no basta*d wants hot cross buns on the 3rd of January.  And to vindicate my point, the buns have been on half price ever since, piled up like sandbags on the bakery shelves.  And please, Sainsbury’s staff – you can leave small squares of buttered bun as samples on your bakery counter until the cows come home – it’s not going to help you shift them!!

I’ve flatly refused to entertain the idea of eating, buying or doing anything else with a hot cross bun until we’re firmly into March.