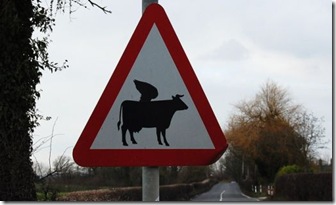 While I get the chance, I opted to take a long weekend to visit my parents down in the darkened depths of Cornwall. It’s looking like the last time I’ll see them this year, so thought a visit was well in order.

I’ve endured some pretty awful journeys in my time, but Thursday night’s debacle on my way down to Cornwall took some beating. Having already suffered 3 (relatively minor) delays, it seems we ploughed at cruising speed into a stray cow that had wandered onto the track somewhere between Taunton and Exeter.

There was no sudden braking, no ‘horning’, just a massive jolt and then the feeling of the carriage bumping, shaking and grinding - which most of the instantly-hysterical passengers took for a derailment. I can only assume the driver had his nose in a paperback or, as my girlfriend thoughtfully suggested, was in the buffet car ‘tucking in’.

The front of the train was badly damaged, the driver’s nerves more or less in tatters and one wheel of the front engine had been pushed out of alignment. After stopping for about an hour while the damage was assessed (and the driver changed his underwear), we then endured an ignominious crawl at a maximum of 20mph into Exeter St. Davids with offal plastered over the front carriages and the engine now sporting a cow’s head as an effigy.

The conductors on the platform at Exeter couldn’t suppress their obvious amusement at the sight.  Another change at Plymouth - where the train for Penzance had to wait even longer for connecting passengers on delayed trains behind us - meant I arrived in Cornwall over 2 hours late.

Let’s hope that the journey back is much less traumatic.