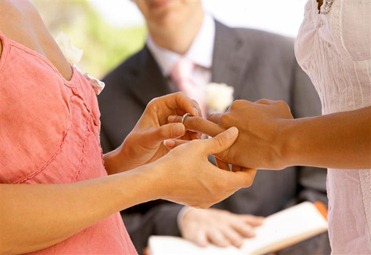 December 2005 – the Civil Partnership Act was born, giving same-sex couples the opportunity to enter into civil partnerships together.

February 2013 – the majority of MPs vote in favour of a change to the law which would allow same-sex couples to get married.

The backlash to the decision was perhaps predictable, but still surprising in some way – why are so many people opposed to the idea of gay people getting married?

Some of the more vocal critics like to point out that marriage is a sacred religious rite, rather than a civil right, often pointing to the Bible to back up their claims. The typically quoted passage comes from the book of Leviticus, stating “If a man also lie with mankind, as he lieth with a woman, both of them have committed an abomination: they shall surely be put to death” (20:13).

Okay, so this does certainly seem as though the fundamentalists have a point. However, let’s not be too hasty and just have a look at another handful of quotations from the same book: “Ye shall not make any cuttings in your flesh for the dead, nor print any marks upon you” (Leviticus 19:28) – getting a tattoo is a sin.

“And all that have not fins and scales in the seas, and in the rivers, of all that move in the waters, and of any living thing which is in the waters, they shall be an abomination unto you” (Leviticus 11:10) – eating shellfish is also a sin, apparently!

“For every one that curseth his father or his mother shall be surely put to death” (Leviticus 20:9) – you’ll be killed just for insulting your parents? That’s a bit harsh!

The church has changed over time; everything has to adapt. Luke 16:18 says that anyone to have either divorced or remarried has committed adultery, and are therefore sinners. Henry VIII cut off ties with the Catholic Church and founded the Church of England because he didn’t like this law.

As the world changes, so must family law. We no longer cut off hands for stealing (Mark 9:43), and women are able to be the boss of male employees, even though Timothy 2:11 seems to expressly forbid this. We don’t stone women to death for not being a virgin at marriage (Deuteronomy 22:20-21) and I can’t imagine many of us believe that clothes made of linen and wool to be inherently sinful any more (Leviticus 19:19).

If you ask us, the world is a better place now that we don’t have to kill anyone who works on a Sunday – how annoying would it be if you ran out of milk in the morning?

And we quite like the fact that rape victims don’t have to marry their rapists. Also, let’s face it: how could eating bacon possibly be a sin?

The world moves on; even Christianity moves on sometimes. Same-sex marriage is simply another step towards global equality, and this is something we all have to strive for. The fact that the majority of MPs voted in favour of a change in the law is a bold stride forwards; now all we can do is wait for everyone else to get on board.