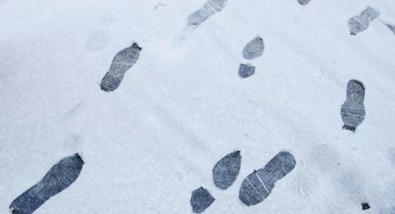 A drunk burglar who led police from the scene of a break-in to his own doorstep with a trail of footprints in the snow has been spared jail.

Lewis Ward, 28, snuck into a home in Raby Street, Darlington and took an iPad. He stole the tablet from a woman who was alone and waiting for her partner to come home from work.

Officers spotted distinctive trainer footprints in the snow by the victim's front door and followed the tracks down alleyways and back lanes.

Police spent an hour and a half following the mile long trail from the victim's home to Ward's house on the other side of town, where they discovered his trainers still wet, with identical patterns on the soles. They found the stolen iPad hidden in a bedroom in the house.

If only he had read or watched a bit of Sherlock Holmes!  Tracing footprints in the snow is one of the oldest tricks in the book.

It’s also nice to know there’s still a place for old fashioned techniques in modern policing.  It certainly beats calling in a helicopter or firing a Taser at the first person who you don’t like the look of.

For the defendant, though, it’s going to take a fair while until he can live this one down.  In fact, it’s nearly as bad as this brarmer…