Demise of the Christmas card? 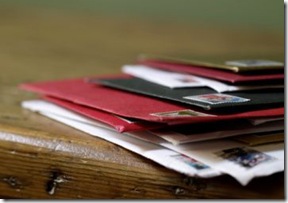 This is a call for the distinguished and learned members of the blawgosphere to share with me their Christmas card sending/receiving experiences: have you sent or received any this year and if so, are the numbers lower than in previous years?  I'm itching to know.

Not so much because I'm nosy, but more that I'm wondering whether I'm alone in sensing that the sending of Christmas cards just seems to be a tradition that edges closer towards extinction as each year passes.

I was going to order myself another bunch from the Carbolic Smoke Ball Company again, as I have in previous years. Still, I'm kind of glad I didn't bother; no one at work seems to be exchanging them, though there is a Secret Santa organised for later this week to coincide with the works Christmas do - so I hope everyone doesn't start exchanging them with one another then. It also coincides somewhat awkwardly for me with a flying trip up to London for meeting, and I'm only due to arrive back just in time for the unwrapping and the trip to the restaurant.

Let's hope the Secret Santa doesn't go the same way as that in the US version of the Office which degenerated into a somewhat cruel, bizarre and painful game called 'Yankee Swap'.

As an aside, I've recently placed my first order with Moonpig.  For as much as they’re talked-up though, I didn’t think their range of cards was fantastic.  Let’s see how I feel once they arrive and I see them first hand.