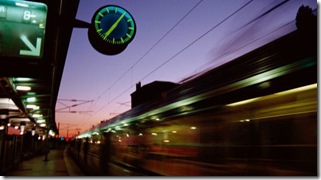 Christmas Eve proved a touch eventful for the Michael and what should have been a 4 hour journey down to Cornwall took well over double that. The fact I’m nursing the onset of a cold, only made matters worse.

I’d been feeling a touch rough in the last few days with a pathetic tickly cough (with curiously few other symptoms) but on Wednesday night and all of Thursday, I was sounding more like a dirty old man with throat cancer. Whenever I spoke on my mobile in public, I found I was attracting curious glances (some bordering on stares) from nearby travellers.

Having driven halfway down to Cornwall with my GF, I initially missed the train I had intended to catch after stupidly following our Sat-Nav’s advice which took us on an off-piste adventure through the twisty and icy roads running through the Cheddar Gorge. I returned to my GF’s parents’ house in Exeter while I waited for the next non-stopping train down to Cornwall.

When I finally returned to the station some two hours later, it transpired that kids / vandals / someone with a grudge had stolen a bunch of signal cabling from the Taunton area which wreaked absolute havoc for all Christmas travellers trying to get up and down through the Westcountry! Once I’d finally made it down to the Plymouth, the final leg of my journey (so much for booking a trip with no changes) was further mired by some curry-stinking goon with an apparent cold sitting next to me and a very annoying ‘artist’ opposite who was chatting incessantly to some bearded guy whose sycophancy towards the former was nauseating.

Suffice it to say, I was having a tough time embracing the festive spirit. Other than that, though, Christmas was fine.

But thank God it’s over for another year.