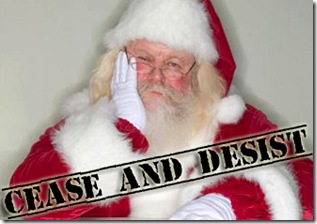 Following on from my post last week regarding Santa setting a bad example, I've got a few more suggestions for making Santa Claus a touch more politically correct (plus a bunch of concerns for potential liability and steps that could be taken to mitigate those risks).

He’s an older gent – so tick the box for heading-off allegations of ageism.

He’s white and male though, so he’ll need plenty of female elves (and ideally those from ethnic minority backgrounds) - see the Race Relations Act 1996 (as amended).  Perhaps Santa should morph into some kind of androgynous character, just to make doubly-sure the anti-sexism box is checked.

Using reindeer as his means of transport puts a bit fat tick in the 'watching his carbon footprint' box - should keep Greenpeace happy - (score one for Santa).  :-)

This is negated, though, by potential allegations of animal cruelty.  Also, watch the food-miles of the reindeer’s fodder.

As much as I like Christmas and the concept of Santa, the lawyer in me says he should call the whole thing off entirely and enjoy his retirement.  For starters, his antics on 24th December would be to open himself up to liability in respect of claims of trespass.  Moreover, leaving gifts scattered around could also lead to personal injury claims from homeowners tripping over them or otherwise injuring themselves.

Santa must also have had a criminal records check (and any other necessary checks) seeing as he’ll potentially be coming into contact with young children – particularly where he creeps in under the pretext of leaving gifts in the bedroom of a sleeping child.  (Social Services would be having kittens at this prospect, no doubt).

Flying his sleigh at more than the speed of light is also a potential litigious nightmare, not to mention the high likelihood of him falling foul of various aviation and driving offences.

He should voluntarily take a breathalyser check after stopping at each home (just to prove he’s left those glasses of sherry utterly untouched) and pull over every couple of hours for a break, lest he should fall asleep at the reins.

He should also ensure he’s fully insured for his deliver-a-thon on 24th and that his insurance is valid across the globe.

To the extent that it's applicable, questions should also be asked regarding Santa's compliance with the Data Protection Act 1998 in respect of his keeping names, addresses and the wish-lists of giftees on record.

In the interests of mitigating potential civil claims and heading-off possible criminal charges, Santa should wear a head-mounted camera so that his exploits are recorded for evidential purposes.  After all, should he come into contact with an excitable child who caught him in the act of leaving gifts or an aggrieved homeowner wondering why the old codger’s landed on their roof, without hard evidence, it’ll be their word against his.  The last thing Santa wants is a trip down to the local station half way through the night on a charge of some offence against the person, or, God forbid, something under the Sexual Offences Act 2003.

Naturally, to the extent that the video footage is retained, compliance with the DPA (see above) should be verified.

Best also make sure Santa has got suitable legal representation, ready to nip down to the local police station anywhere in the world, should the police arrest and interview him during the night.  Might want to look to a magic-circle firm for this kind of cover.  ;-)

And this is all before we start considering Health and Safety legislation, plus the thorny issue of potential liability over defective gifts which cause injuries to the giftees.

I should imagine that employment law as it applies to the elves and Santa's other pint-sized helpers making the gifts, would prove to be a bit of a proverbial can of worms.

I hope his 2009 exploits passed without significant incident.  I've not heard anything on the news at least.  ;D