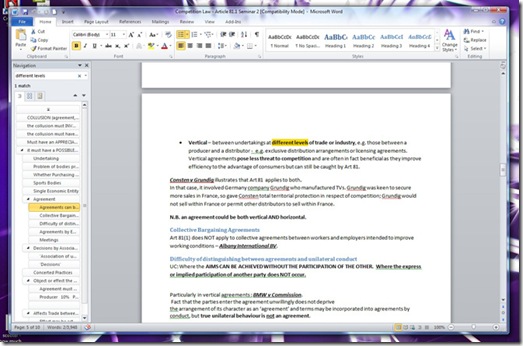 For the last couple of weeks, I’ve been trying out the public beta of the next version of Microsoft Office, just as I did back in summer 2006 for the second beta of what was to be Office 2007. So far my experiences are positive, but this isn’t the quantum leap (from the perspective of UI and, to a certain extent, functionality) as Office 2007 proved over  its predecessors.

I’m not going to run through all of the new stuff in there; I just intend commenting on the new features that I’ve encountered or those which I have particular opinions of - based on my (rather limited) experience with the beta.

I should point out at this stage, I guess, that as Office has matured over the years, certain additions have just felt like change for change’s sake. I get that feeling with Office 2010 – possibly more than ever.

· Pretty new icons for each application and a nice new orange Office logo. Still, I’m not sure how much your average Office user will care about this stuff.

· Stronger colour ‘branding’ for each of the apps; but was identifying between them ever a really issue?

· Much better in-program navigation – the search functionality is superb and surpasses Firefox’s inline search which not only searches as you type but also offers excellent file-wide navigation at the same time in the navigation pane.

· Excel is meant to have got a bunch more functionality. Still, the elementary stuff I do in spread sheets could be done with Office 97 or even earlier.  So it’s a bit of a non-event for me.

· I very much like the improved UI provided the silver theme is turned on. The gradient looks fantastic when the Window isn’t maximised; when it is maximised in Visa, XP, (but not Windows 7) however, the effect is lost but it’s still less in-your-face than the more gaudy Office 2007 themes.

The black theme looked awful in both 2007 and the 2010 beta, but the standard blue theme in the 2010 version, just looks horribly washed-out and lifeless.  The default blue theme of the 2007 version was much more attractive.

· Right click menus in Word are narrower, more streamlined and offer more helpful context-sensitive options than ever before.

· The ‘backstage’ screen accessed via the coloured ‘file’ tab in each of the apps might be seen as slightly retrogressive from a UI standpoint – does it really need to cover the entire workable space?

· Big improvement with Outlook. Shame the Google Calendar sync gizmo isn’t working with it yet which I rely on heavily. I’m told that a registry hack does the trick but this post is about documenting my ‘out of the box’ experience.

· OneNote better than ever, particularly with the ribbon interface.

· The Word 2007 bug which makes text render incorrectly giving the impression of duplication until you scroll and it disappears has seemingly been fixed. I know this isn’t a confliction with a specific video driver as I’ve run across the exact same thing on around 6 or 7 machines all running Office 2007. So far, so good in Office 2010.

· Send a smile / send a frown - (the means of providing direct and immediate feedback to Microsoft about things users like and dislike about the beta) ironically is the only patch of buginess I’ve ran into so far.

There’s no doubt about it, there’s a lot of good stuff in Office 2010. Still, I’m not sure how much of a compelling upgrade it makes – particularly if you’re running Office 2007. I guess the conservative, softly-softly approach practiced by the Windows 7 team under Steven Sinofsky’s leadership, which favoured small incremental improvements and fine-tuning over quantum leaps, has filtered down to the Office team too. That’s not necessarily a bad thing; just don’t expect to be blown away by the next version of the world’s favourite office productivity suite.

Email ThisBlogThis!Share to TwitterShare to FacebookShare to Pinterest
Labels: Computing for Law Students